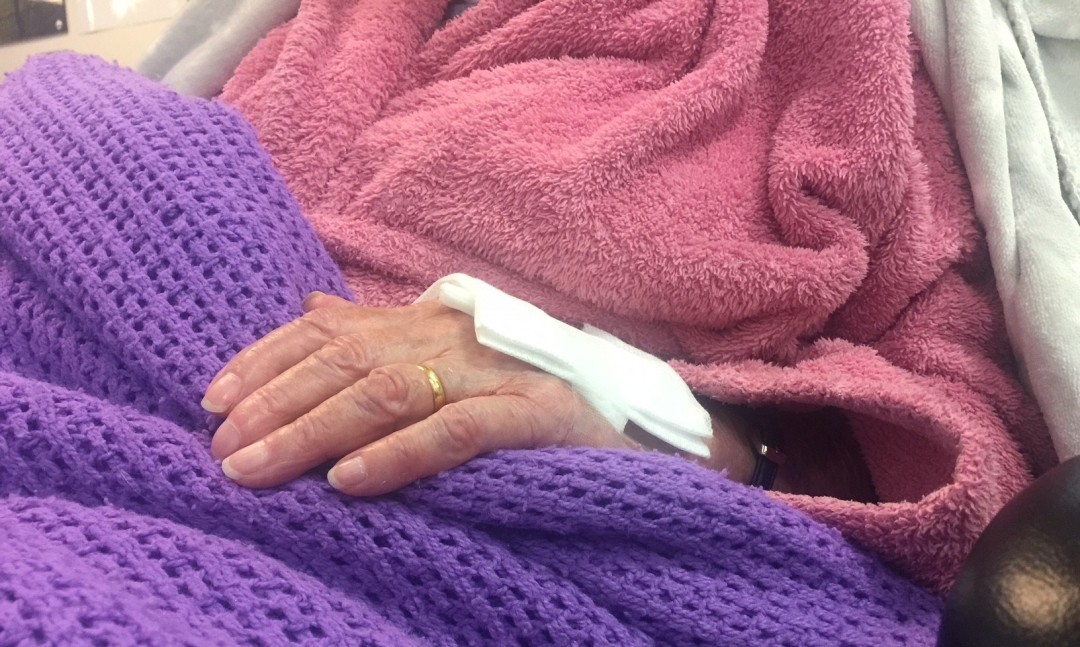 Shortly after 1 am on Sunday morning mum’s bed sensor woke me. At the same time, I heard a gentle thud. I discovered mum on her knees with her head on the floor next to her bed. A bit shaken, she complained of a sore knee. As I helped mum up, I noticed a nasty cut on her left hand.

Told to take mum to A&E

The wound was around 5 cm long and 3/4 cm wide. It looked too serious for me to dress, so I phoned NHS Direct Wales to find out what to do. After answering lots of questions I was told to take mum to A&E. I had already told the call handler that mum had dementia, but this didn’t seem to influence her advice. I put a temporary dressing on the wound to stop the bleeding and off we went.

It was around 2 am when we arrived at A&E at the Princess of Wales Hospital in Bridgend. I left mum in the car and went to find a wheelchair. There were none available. After the woman in reception had taken mum’s details, I went back to get mum.

Throughout the ordeal that was to follow, I was touched by the kindness of patients, relatives and staff. A woman came to help me get mum from the car to A&E. The receptionist left her post to find a wheelchair in an area out of bounds to us. When I returned from the toilet, I noticed a woman had moved to sit next to mum to watch over her. There was a silent sense of solidarity between those in the waiting room, particularly for people who seemed vulnerable.

After around two hours we were called to see a nurse who assessed the injury, checked mum’s vital signs, and put on a temporary dressing. We were sent back out to the waiting room to await a specialist who would apply paper stitches. Up until this point mum was patient and understanding. She didn’t know where we were, but appreciated my repeated explanations that she’d cut her hand and we were at A&E waiting for treatment.

After four hours mum was getting restless. She kept asking why we were there, if we could get a bus or a boat. She needed to get home. Her parents would be worried. She asked if she could catch a bus back to the UK. She was disorientated.

There were people crying. A woman came in breathing heavily, crying and shaking. Mum seemed oblivious to most things, but she noticed this poor woman. Another woman quietly cried and sniffed in the seat behind mum, as her friend tried to comfort her. A child was carried through the doors to A&E.

Mum kept thinking she was there to keep me company and so started getting grumpy with me. At times, I’m afraid, I reciprocated. As mum’s distress and questions grew, I kept asking the receptionist how long it would be. Initially there were two people ahead of us waiting for the same specialist. I found out who they were and felt concern for them when I discovered they had been in A&E since 11 pm and 11.30 pm respectively. I didn’t think we’d be waiting that long.

Mum next to be seen

Eventually, around 8.30 am mum was called. A specialist nurse assessed what was needed. Another more junior nurse carried out the task of applying paper stitches to mum’s hand. When the nurse’s handiwork was checked we were finally able to leave A&E. It was around 9.00 am.

When we got home, mum was disturbed to discover her parents weren’t there. She burst into tears as it dawned on her they were dead. She was exhausted and emotional. So was I.

Did it need to be like this? Are there policies to support people with dementia in A&E? Could the woman at NHS Direct referred us to a paramedic or first responder so mum could have stayed at home? At A&E there seemed to be no allowance for the fact that mum had dementia. I asked if they had dementia-friendly policies. I’m not sure I wanted mum to have priority over other patients, already waiting over four hours themselves, but why did any of us have to wait such a long time?

My mother was diagnosed with dementia in late 2015, after a series of mini-strokes. Following her rapid descent into confusion it was recommended that she move into a care home. I stayed in her house in South Wales, to work with the care home to improve her care. Mum suffered extreme distress and anxiety in the care home so I finally decided to move mum back to her own home in July 2018. Sadly mum passed away at the end of 2019. I still have a few more posts that I want to write in 2020. I'm grateful to Jack Latimer for editing my blog. View all posts by juliasdementiablog

14 thoughts on “Saturday night and Sunday morning in A&E”